I have always enjoyed pinball machines. Too many people think of them as just wildly flailing flippers, trying to keep the ball in play. True, there is always some of that, but there is so much more. Once you get past the problem of keeping the ball in play, you will start to notice that there are goals and targets to get to those goals. In order to get to the highest score, you need to actually aim for certain things, and sometimes in certain orders. There is definite skill involved along with the randomness that only a physical interaction can bring. Every game on a particular table has the same goals, but every game plays very differently.

Pinball machines reached their height right along the same time that video games became popular at arcades. Video games had one big advantage, there is almost no maintenance involved with them, Pinball machines on the other hand are filled with an incredible number of moving parts that are constantly pummeled by a heavy ball. They have constant upkeep, there’s no wonder that they became less and less prevalent in the video era.

Well, that’s one more problem the iPad has solved! The pinball games on it are amazing, the action is very realistic, and there are no mechanical breakdowns. That’s even more important with the last generation of pinball machines. They had gone from a fairly simple layout to to devices with multiple ramps, magnets, multiple sets of flippers, different levels, etc. A lo of the pinball machines from the 80’s were fun, but they eventually would get the ball stuck in some weird way, or some spring would get loose and render it inoperable. No more…

Pinball used to be a pretty simple game. You hit as many targets and numbers as you could while avoiding loosing the ball. Sometime along the way, they introduced the concept of goals like hitting all of one set of targets would trigger a bonus of you did a specific thing afterwards. That added a little more thinking into the process. Once the technology was there, they started to introduce things like multiple balls, multiple levels, and lots of other gimmicks. Here’s an example from an iPad game. 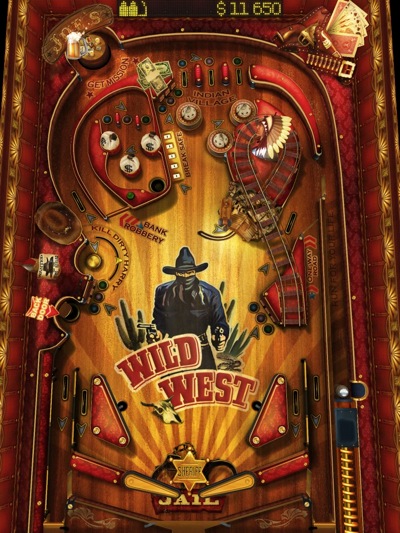 See the three money bags in the upper left? You have to clear the targets over by the pile of money above them before you can get to the money bags. This one also has a rather simple ramp made to look like railroad tracks. If you hit a certain target, you will then get a bonus for each time you put the ball around the ramp. If you hit the bell in the very top left corner, the table will light up on of the many triangles on it. They’re not illuminated in this image, but the easiest one to see is on the left side about midway on the table. Once a triangle/arrowhead lights up, you get a bonus for hitting whatever it is pointed at. There is usually another bonus for doing several in a row. If you lose a ball, everything resets of course and you have to start all over again.

Towards the end, the tables got a little crazy. They were fun to play, but they were really gimmicky. Check this one out. 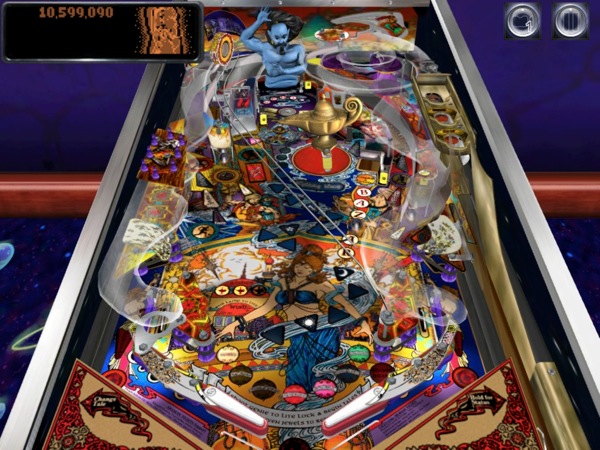 I played this in the arcades and even then I thought it was getting too Las Vegas for my tastes. Lots of flashing lights, voices, lots of crap all over the table. The multi ball has 4 balls at a time! Lots of the graphic you see on the table light up and/or flash. It also showed where we were with point inflation. Every so often, the number of points you got for anything went up. This table gives you a free game when you hit 600,000,000. It’s like the table lives in Zimbabwe or something… This particular table suffers on the iPad because the ball can be hard to see. It’s just another graphic on a really busy screen. It was always easy to see the ball on the original/

It’s interesting that I rarely played what I have always considered the best pinball machine. Black Hole (not to be confused with the machine made in conjunction with the Dinsey film) was a very difficult game to play. 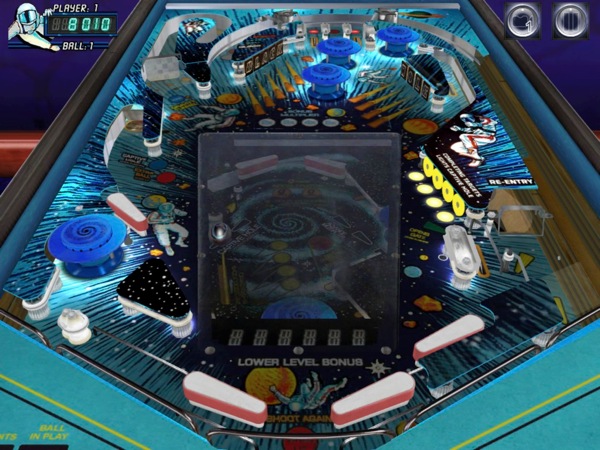 It was one of the first ones that I ever saw that had multi ball and a different level. This table demanded real skill. On a lot of tables, getting to the other level was just a fun way to wrack up points. On this one, if you got sucked into the black hole, you might loose the ball. The lower level in the center of the table can indeed get you some good points, but you need to hit certain targets and avoid others if you wanted the ball to get back to you on the top. You could also complete the yellow targets on the right and then have the ball go over the sensor in the channel behind the right bumper. That would open up the gate to get the ball back as well. I almost never get the ball back unless I complete the stuff on top first. In addition, when the multi ball setup was enabled (not a particularly easy thing to do either), you frequently had to contend with both levels at the same time!

So why didn’t I play it much? Well, it was hard. Plus, it was also a 50 cent machine. That would have taken too much money to get good at when I was 12 or whatever. I was so happy to find this in the app store! Now I can try to master that table that intimidated me so much back then. They are also going to try to make other tables available too. I remember a favorite, but I don’t exactly remember its name. Something to do with knights I think. It had the innovation of being able to trigger magnets that would prevent the ball from going down certain channels. Really added another dimension to the game.

I think it’s going to be funny if the golden age of pinball will come about because of the iPad. There’s nothing to break, and the physical gimmicks work correctly every single time. The 12 year old in me is grinning from ear to ear.