The app store for the Mac launched back on the 6th. I took a look at it that day and the next and wondered if it was going to do much. Several days later I did something I probably shouldn’t have done, I went through the app store again, category by category. Ouch! Here’s what I got…

Clippy. We’ll start out with an inexpensive app, this one is only 99 cents but it’s brilliant. I don’t know how many times I’ve wanted to copy and paste multiple things, but since the clipboard can only store one item at a time I had to constantly go back and forth between the sources and the destination. Clippy to the rescue!

Now I can copy as much as I want and have all of the snippets at my disposel at once. Like I said, simple, but awesome. Well worth the 99 cents. It would be perfect if it could do pictures as well, but the text only mode is still a Godsend.

This next one is probably at the other end of the value scale. It’s 5 bucks and it’s called insight. What is it? Ummm, I guess you could call it a visualizer. What does it visualize? The workings of your computer. It takes readings of your CPU activity, free memory, memory wired (whatever that is), and memory active and turns them into a moving shape.

You can’t see it in that screenshot, but those colors are constantly moving. It sort of reminds me of the “Bit” character from the original Tron. Yes, this is about as geeky as I hope to ever get, but I like it.

IP Scanner is a a free app and it’s a simple one. It essentially shows me who is on my network. Since I’m the gatekeeper to the internet and the other folks in the house are supposed to pay me for it, I want to see who is using it. This is a quick way of checking. And you can’t beat the price.

Sketchbook Express is a free app I downloaded on a whim since I don’t have any other drawing apps. This is the baby brother to the Sketchbook pro app and it will most likely do what I need it to do.

Now we get to the ouch portion of the post… Years ago, a program called Graphic Convertor was bundled with the mac OS. Maybe 10.2, 10.3? I don’t remember. I do remember that it was useful and easy to use, so I bought a full license. It is a lot cheaper than photoshop, and it could do the stuff I needed it to do. I saw it on the app store and noticed it was version 7.03. I had 4.1 installed, so I went ahead and bought the current version for $35 or so. 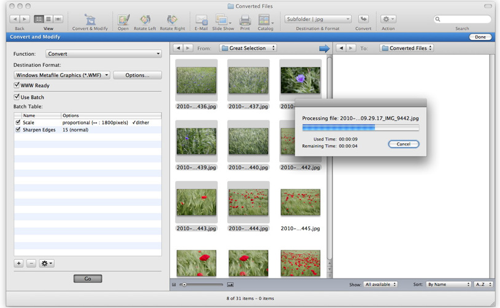 They have really cleaned up the interface and have put in a ton more functionality, it’s well worth the $35. In particular, I love the smart trim feature. They have also put in a browser and organizer. I haven’t gotten a chance to use it yet, but it looks good.

Pixelmator is another graphics program that I had heard of, and had heard good things about. Once again, it has a lot of the functionality that mere mortals need out of photoshop like curves adjustments, layers, etc., but at a fraction of the price. I took a look at the screenshots and the home page and went ahead and bought it even though I had just bought Graphic Convertor. 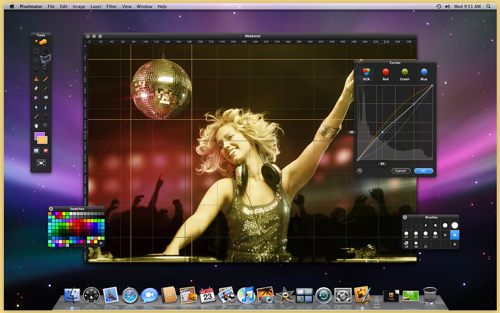 I think the UI is more polished in Pixelmator, but what really won me over was the support pages for the program. They have tons of video and text tutorials as well as a thriving forum. I think Graphic Convertor is a little hampered by the fact that they are a German company. There may be more help available in German, but that doesn’t help me much. So which one is better? Well, I did buy both, so I think they’re both pretty good. I may not have bought Graphic Convertor if I already had Pixelmator, but I am glad I have both, even if Pixelmator is in the $35-$40 ranger as well. I’ve used Graphic Convertor for so long that I’m pretty comfortable with it. If you’re a graphics newbie like me, you would probably be better served picking up Pixelmator first and then see if you need the conversion features or the organization features of Graphic Convertor.

The last app I downloaded was the current Stuffit Expander. it’s a handy app for expanding compressed files, and it’s free, so it was a no brainer. I downloaded a few more free program to see if i liked them, but I didn’t so I deleted them. No harm, no foul. I’m sure there will be plenty more new apps in the app store as time goes along. I hope I can afford this…