Love it. I bought the 27″ iMac and i put an extra 8 gigs of RAM in there.  Oh, and I also put in a 2 TB hard drive. Isn’t that a lot? Well, right now I have 3/4 of a TB (approximately 750GB) and of course I keep adding more. There aren’t any 1.5TB drives available, so 2 it was. What about the RAM? I’m hardly a power user and my Macbook with 2 GB of RAM was still doing OK. Well, OK is a relative term… Right now, I am re-encoding some videos, watching live HD TV, have my chat windows open, the internet, and there isn’t a hiccup, it isn’t even flinching. I am also using about 8GB of RAM. I could do some of these things at the same time, but I would have to choose between the live TV and the encoding. Now, no problem.  Check it out. 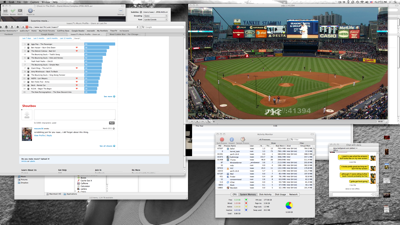 The encoding program is behind my browser window. While it’s encoding, it isn’t much fun to watch. Watching the Yankees/Red Sox game instead. This is the total opposite of how I use my iPad. I tend to get absorbed in one thing at a time on my iPad, I’m doing 4 things at the same time on my iMac. Would I do the same thing on my iPad if it had the power? Probably not. My usage on the iMac is a function of both the power and the real estate. The iPad screen is just too small to inspire lots of multitasking.

This is an mazing TV.  I can play a full 1080 stream and have plenty of real estate left over. In addition, the video is sharp, there aren’t all those jaggies like I was seeing on my poor Macbook. Even when blown up to full size it looks pretty good. If I sit just a little ways from it I can’t tell the difference.

So while the computer is a hit, my current ergonomic situation is not. I need a bigger desk. The one I’m using now would be fine if I could sit at the middle of it. This one has several drawers on the right, so I have to sit to the left. I really need to be in the center of this guy. Plus, I need a real chair. This one is all sorts of bad.

Bottom line, it’s a fantastic upgrade. This, along with my iPad, has me set up both at home and on the go.We’ll see what kind of stuff I might start doing now that I have the horsepower.