As much as I loved playing Atari games at home, I was only ever good at two of them, Warlords and Yar’s Revenge. I pretty much sucked at all the other action games. I never did well at any of the arcade games even though I spent a fortune (to an 11 year old) there. Games like Defender really intimidated me. I enjoyed watching people play that, but I only ever attempted it a couple of times. Still, it was a good time at the arcade.

I went to the arcade that was within walking distance of my house all the time. There was a guy there that I saw all the time, he was a real whiz on all the tough games, even on the pinball games. He always seemed to wear a Black Sabbath t-shirt all the time, it was my first awareness of that group. He disappeared for a while and when he came back, he was in a uniform. He had gotten shipped off to some military school and got shaped up. No more arcade for him!

The two biggest and best arcades I ever went into were both on vacations. The first was in the bottom of the Contemporary Hotel in Disney world. Keep in mind that this was before Epcot was built. I don’t actually remember much about that trip, but I sure do remember that arcade! It was huge, I thought i had died and gone to heaven. They had the latest games, but they also had all the classics like Space Invaders, Star Castle, and Lunar Lander. They even had some mechanical arcade games that predated the electronic ones. The other one was on the boardwalk in Cape May NJ. I didn’t care a whit about the beach (still don’t) but I wanted to live in that arcade. They had all those pseudo gambling games there that gave you tokens instead of money and also skeeball. Those were a real novelty to me and I ate it up.

When we moved away from the suburbs, my arcade days were over. Every once in a great while I would wander into a game room in a mall, but they were never proper arcades and they left me cold. Plus, none of the games there really resonated with me. Dragon Slayer was all the rage, but it’s animated sequences off of a laser disk left me cold. I missed the vector graphics of the old Atari games…

Years later, while I was in college, I came across an original stand up Missile Command game in Cortland NY. I got all misty eyed even though that was a game that came out before I got into the arcades. I had played it on the Atari home system and it was cool to see the original. Fast forward another couple of years and I was in Vancouver with my brother and father. I found an original tabletop, 4 player Warlords arcade game. 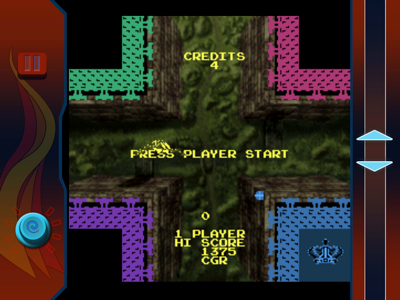 I was dumbstruck. That was the one game I owned on the Atari console at home. And when I say “owned” I mean it was the one game I dominated in. I could play anyone and beat them. It was my one taste of video game mastery. I had no idea that the arcade version had ever existed. I wanted it so badly. I had visions of being the guy that could beat anyone else in an arcade, including the dude in the Black Sabbath t-shirt. Alas, it wasn’t to be. I sadly left it in Vancouver and despaired of ever seeing it again.

Imagine my surprise when I loaded it on my iPad. I may never stop smiling. Total nostalgia overload….