I got a google wave invite several days ago in my inbox. I let it sit there until my brother called up last night and wanted to mess with it. It’s a very interesting program.

At first, I thought it was just another instant messaging program (IM). You can use it like that, but I think it’s a bit cumbersome as compared to other IM clients. One twist Google has put on things is that you can edit the other person’s text, and you can both see that happen in real time. Hmmmm…. maybe it is more than an IM client.

Wave also has a word processing capability. It’s limited, but perfectly capable for normal stuff. So imagine this, you can type up a document and share it with someone else, or a whole group. They can then add to it, edit it, append it, etc. It’s an ideal tool for any collaborative project, for brainstroming if nothing else.

Unlike an IM client, you can leave what you’ve done up and then come back to it later to see what the others have added. So Wave is kind of like a cross between an IM client and email, but everyone you have added to the wave can see the edits in real time so it’s also like a really responsive Wiki application too.

There are all sorts of different content you can put in as well. Here’s a wave I’ve made up with a youtube video embedded in it. 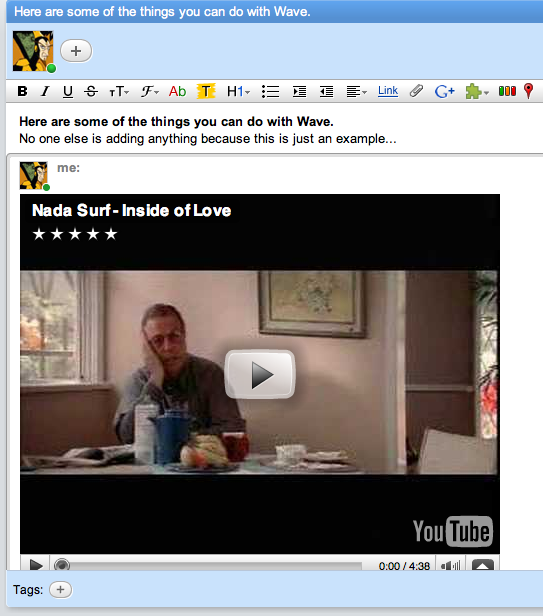 It’s just as easy to put in Google maps. There are other gadgets out there for Wave, but I haven’t had a chance to mess with them just yet. One of the ones the Google team used that is interesting allows you to put the wave in your blog. That allows all of the same functionality of the wave, the interaction, the editing, etc. in a blog post! As developers work on this, the functionality will continue to expand.

So Google wave is a word processor, IM client, wiki maker, collaborative tool, and email all rolled into one thing. It takes some getting used to in order to take full advantage of it. I can’t say I’m there just yet. I’m still stuck in the either it’s an email OR an IM session mode. I do think that with more use, I’ll get into the rhythm of using it. It’s still early in the game for Wave, but I see big things ahead for it. We just need more gadgets for it, a little smoother operation, and most importantly, a critical mass of people using it. Watch out for Google, they have some big things coming down the pike!