The groups I belong to on Facebook (Libertarian party, Mises Institute, etc.) land me on some interesting ads lists. One caught my eye, it is a group minting silver coins that say “End the Fed” on the front and a chart showing the devaluation of the dollar on the obverse.They are 1 oz. silver coins and look quite good. I was struck at the quality of them and did a bit of googling. It turns out they aren’t the only “hard money” group out there printing their own coinage. Check out these hard times tokens. 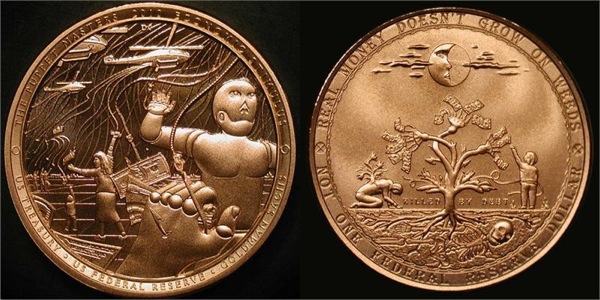 Tell me that isn’t some anger on those! Using puppet masters on the front and using the slogan “Real money doesn’t grow on weeds. Not one Federal Reserve Dollar” on the back pretty much sums up that group’s feelings. I can’t say I’m unsympathetic to the cause, and I’m mightily impressed with their coinage to boot.

One of the more stunning coins I came across was the “Amero” currency. I was unaware that there was an idea that would have had us adopting a single currency across all of North America. There were a lot of conspiracy theories out there, people going crazy over losing our sovereignty, etc. As far as i can tell, all that is dead now. Personally, I wouldn’t care if we did have a unified currency as long as it was made like these “concept” coins were, in copper, silver, and gold denominations. If we agreed on using hard currency like this, it wouldn’t matter where the money was from, or even what was printed on it. Plus, who wouldn’t love carrying these around in their pocket? 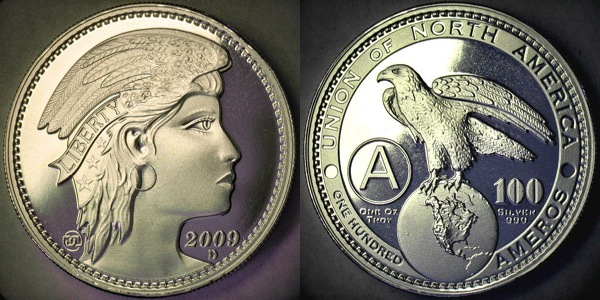 Go ahead, tell me those aren’t beautiful coins, I dare you! I still think the days of us going to a hard currency are a ways off. I’m not sure if it is inevitable or not, part of me wonders how far the dollar will devalue before there is either a crash or revaluation, or both. I’d welcome hard currency, especially with such talented artists out there making the coins!