In my mind there have been three important, long lasting comic strips that have defined the genre. Peanuts, Doonsbury, and Pogo. What? You haven’t heard of Pogo? Walt Kelly, the creator, died in the mid 70’s so those of you in my generation or later can be forgiven for not being familiar with it. Kelly was able to use swampland animals to make pithy comments on culture and skewer politicians that went too far. His most famous series involved making fun of Joe Mcarthy and the House Unamerican activities committee. It was pretty bold back then. Not only that, Kelly was a master illustrator. His panels are masterpieces, his drawing and lettering are still unsurpassed. He was able to do slapstick very well because of the artistry of his drawings. His lettering did an amazing job of differentiating between characters and their personalities. The strip ran for 30 years or so and had a tremendous influence.

So where the reprints? It’s a fair question. I don’t have a good answer for it. There seems to have been a sort of curse when it came to Pogo reprints. There were a bunch of them done in the 60’s or 70’s I think but they weren’t particularly comprehensive. My father has a handful of these and this is where I discovered Pogo. I once brought some up and let my roommate in college read some of them and he got hooked too. Eclipse comics tried to reprint some of the old Pogo comic books and they went out of business after publishing only 5 of them. Fantagraphics started a reprint series and got about 10 thin soft cover books out. That petered out too, and I never did find out why.

Fantagraphics announced that they were going to do a proper reprint of all of the Pogo books, starting from the very first ones going all the way through to the end of the series. Things stalled for years, most people assumed that it just wasn’t going to happen. Fantagraphics finally had a ship date, and I got really excited, so I ordered the book. That was in June 2010. I just got the book today.

It did take a while to get here, but it is a beautiful book. It’s bigger than the Peanuts books Fantagraphics is doing, and it’s a good thing. Kelly wrote for the larger panels that were available in papers back then. His artwork is filled with amazing details and you really do need to have larger panels to take advantage of it. It took a long time, but the wait has been worth it. I’m going to keep my fingers crossed and hope that they are able to release the entire series, Walt Kelly’s legacy has been waiting too long!

I’ve talked about “Sammy the Mouse” by Zak Sally before in this blog. It’s a really odd tale (so far) with really evocative art. Fantagraphics has published the first three volumes in a beautiful format. Zak wants to make a book that collects the first three volumes, and he wants to do it himself. No really, himself. He’s going to print it in his garage, the warehousing, and the packing and shipping himself. Sounds like the only thing he won’t be doing is the binding. Actually, he will be making 10 hardcover versions. He’s hoping to raise the money for the project on kickstarter. It’s well worth checking out.

If you like comics, this is a great project to support. It’s cheap and well worth it!

Just finished up three of the 7 volumes of the Love and Rockets collection I recently purchased. When the comics were originally published, the issues would have stories from both Jaime and Gilbert Hernandez. These reprints have separated them out, so I’m unable to read them in the original order they were published. I decided to read the Jaime stories first since that’s the story arc I was most familiar with.

There is a lot of progression as the series goes on. It starts out very… comic booky. There are scantily clad women, dinosaurs, rockets, and generally silly plots. It starts out set in some sort of fictional place. As the series goes along, the plot becomes more serious (mostly) and the world turns into ours. The two main characters are Maggie and Hopey, and we follow their ups and downs throughout their adventures across the country.

As the series went on, the stories became more involving. There are all sorts of romantic twists and turns, a punk rock undercurrent, and lots and lots of character development.  I gotta say, I became more and more amazed at Jaime’s artwork as the comic progressed. His ability to set a mood without words is downright cinematic. Check out a few of these panels…

I love the expressions, the action (in a freeze frame no less), the pure graphic elements. I can’t get enough of the shape of the neck of the guitar to the left. I also love how it is a reflection of the background to the right of the panel. The blankness of the left side says a lot about the plot as well as the characters at that point. This sort of thing was done on every page, just amazing… Check out this title page: 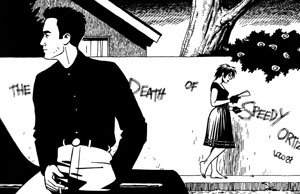 How’s that for graphic awesomeness? I’d be proud of any still from a movie I shot that was that perfectly composed.

There are some problems though. There’s a little too much gratuitous nudity and sex for my tastes. There are some times when it makes sense in there, but more often than not, it’s just for titillation. Another thing that I wish was developed more in discussions about the strip is just how sad all the characters are and it is tied directly to the decisions the characters make. Willful unemployment, drunkenness, uncontrollable anger, promiscuity, all lead to broken people. Most of the people I’ve seen writing about this series seem to have the attitude of “It’s too bad that things didn’t work out” but I’m glad that Jaime made the consequences fairly severe. The end of this series has the two main characters reunited in the back of a police car (for assault) driving towards the station.

I’m reading the volume that collects the oddball stuff that isn’t directly tied to the two main story arcs. So far, my favorite character in there is Errata Stigmata. I eyed a story of hers revolving around her youth trying to deal with he stigmata condition. She gets taken to a convention called “Stigmatacon” and things proceed to happen. Looking forward to that. Once I’m done with that book, I’ll tackle Gilbert’s volume.

In my ongoing frivolous spending with Fantagraphics theme, I ordered the complete “Love and Rockets” series. This is a comic that I started reading in high school. I didn’t really get it back then, but I really liked the art and I could tell that there was something big going on. It has intrigued me ever since. After reading a zillion reviews saying that the series is a landmark achievement blah blah blah and seeing it on sale, I broke down and ordered it. Whoa…

I didn’t realize that the series had gone on for close to 20 years. That’s 7 volumes at 270+pages, that’s a lot of comics… Still, at only 68 bucks, it was a steal. I’ve started the first volume and I’m enjoying it quite a bit. It’s my understanding that it gets serious later on. Right now, it’s a lot of fun. Will keep folks updated if it’s worthwhile…

If you’ll remember, the fact that I was saving a decent amount came as a bit of a surprise for me. I decided that I would give myself a break and do some frivolous spending, here’s the first example.

I hadn’t bought any comic since, I dunno…. my junior year of high school? Actually, the last comic thing I bought was a real extravagance, a hardbound, slipcased collection from Carl Barks. It’s signed, etc. I think I spent upwards of 2 or three hundred dollars on it at the time. I should look into what that might be worth these days… Actually, I continue to buy newspaper comics reprints. I’ve got a ton of the Peanuts strips and I am eagarly awaiting the Pogo compilations as well. I might break down and get the collected Krazy Kat as well.

Anyway, I work with a few guys that are crazy about comics and I’ve started to read about comics again so I decided to buy some and see if I might get into it again. No, I’m not buying any superhero titles. I just can’t shake the adolescent vibe to those. No, instead I’m diving into the so called alternative comics world. A world where comics aren’t about heros and villains, it’s about telling a story via images and text. My first foray into this is “Sammy the Mouse” by Zak Sally. 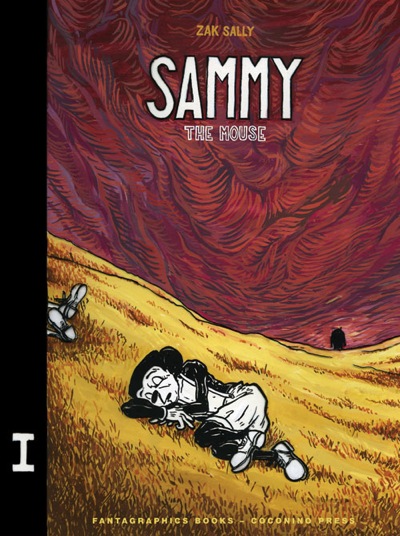 This is a pretty weird story, I’m not sure what I think of it yet. I bought the first three issues. The comics themselves, as objects, are lovely. They are on a really heavy stock and stitched together, they even have a slipcover. This title is part of the “Ignatz” series from Fantagraphics. It’s named after the brick throwing mouse from Krazy kat. There is a real pleasure from handling a nice object and I’m getting the idea that this is becoming Fantagraphics thing. From what I understand, they represent the folks that are resisting digital comics, these are people that love the books and love the physicality of them. I can sympathize, but I gotta like what’s inside, you know?

And right now, I’m not so sure. It is a weird, bitter world that Mr. Sally is making. With three books done, I feel like he is still introducing the story. The graphics are very cartoony, they are done in black and white with brown and blue shading. He manages to convey quite a bit of violence without gore. The cover for the second issue is a good example. 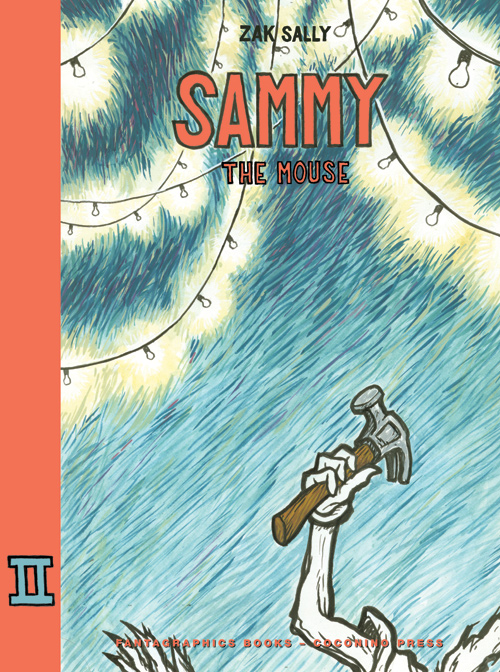 And he also has a real Bergmanesque way of using montage. Comics have the potential for some really different methods of telling stories, it makes it interesting to look at and read. This page ties together 4 different occurrences all going on at the same time. 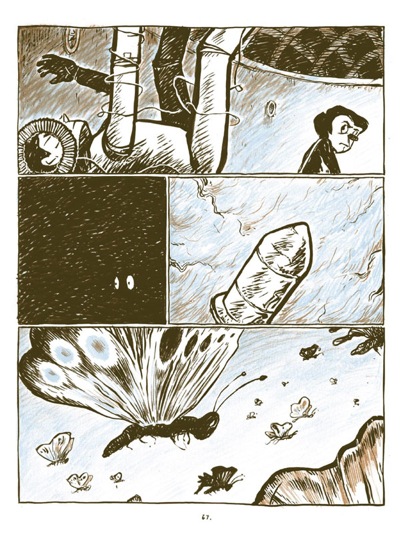 This isn’t a Superman comic! Think I’ll continue with the series, it’s interesting enough, and the characters are starting to come to life. Those of you out there that are into this world, let me know what else I should look into, I’m getting intrigued by this world. I’m interested in seeing what is possible with this type of storytelling.