This came from the website of the Yemen Observer, one of the English language newspapers in Yemen. 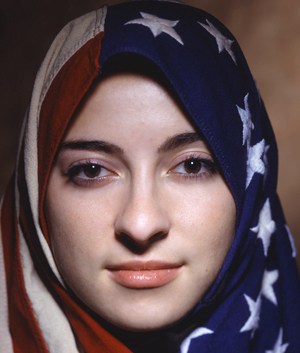 There’s no way to know what she meant by it but I find it quite powerful. Many people in the US and Europe see the hijab as a repressive aspect of Arab culture. Of course those people have probably never asked one of those women why they cover up. Part of it is simply dressing appropriately in that culture. A woman here in the US might have a reason to go topless, but she would have to think about it long and hard before she did so. It just isn’t done for the most part.

A more important part of the hijab is its religious importance for those women. By wearing the hijab, they reaffirm what they believe. Here in the US and in Europe, it is also a marker of her faith. Women who wear hijab here know that they are in some senses representing Islam so they better act accordingly. I wish more people that wore a cross would remember that as well.

The hijab is very powerful symbolism when taken in context of faith. Women are quite literally taking refuge under it and by extension Islam. That is why, in my opinion, wearing the American flag as hijab is so powerful. It is not just a religious statement, it is political.

Of course, it is the kind of politics that I like. She is free to do this, the US constitution guarantees her freedom to not only make this statement but to be a Muslim as well. It is everything that makes this nation great.

She may have been making an “in your face” statement to Americans with it. She might have targeted those people that conflate Christianity and being American or it may have been some sort of statement about the so called War on Terror. I have no idea, but that’s one of the great things about art, the artist does their thing and we are left to makes sense of it. What I love about it is going to piss some others off. How an American acts will probably be different than someone living in the middle east. The many different responses that can come from this is what makes it a great work in my opinion.